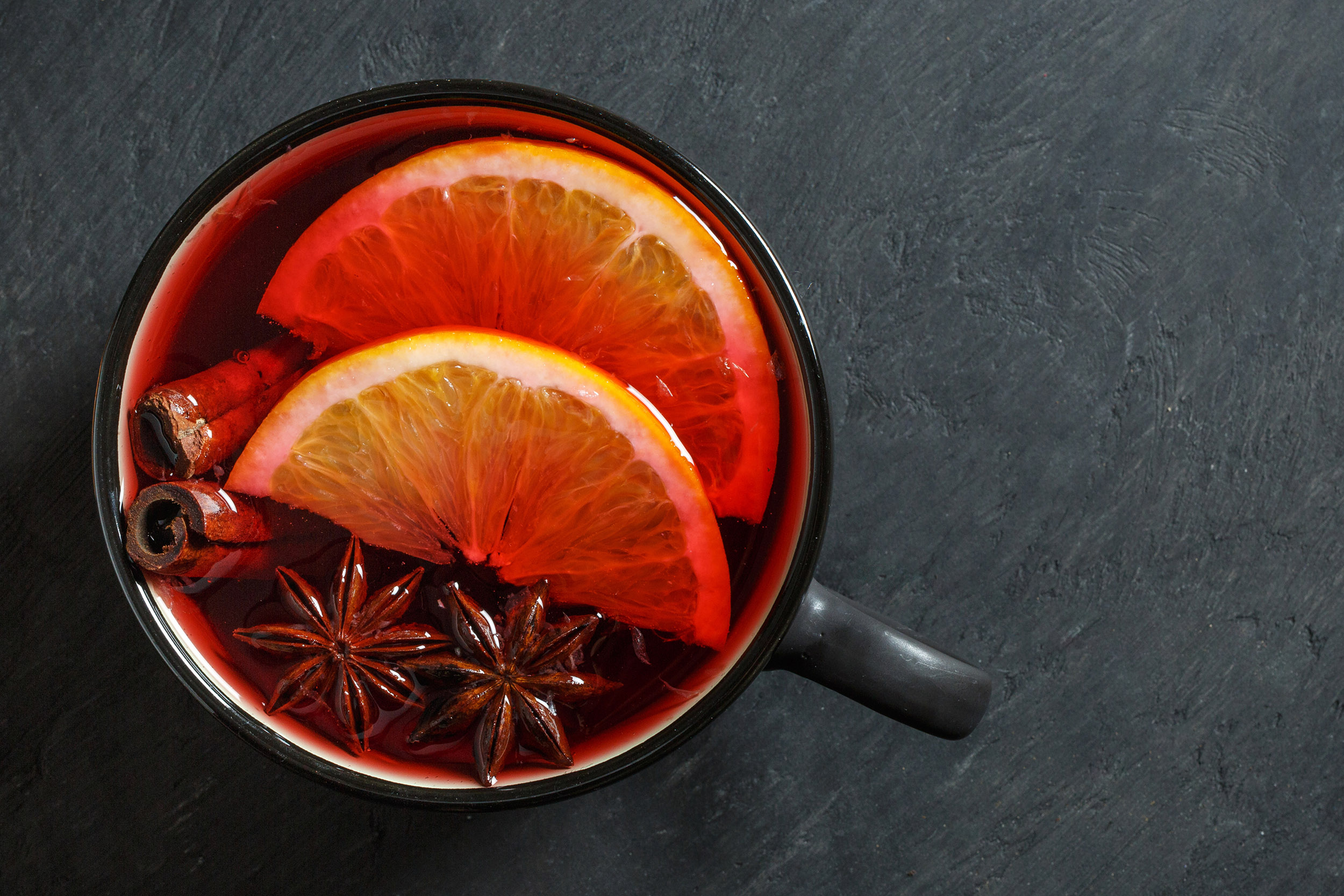 When it comes to holiday beverages, the first thing that might come to mind is eggnog. However, mulled wine is equally festive and can easily be prepared for just two people or a party of 20!

So, what exactly is this tasty drink? Mulled wine is a heated and sweetened (typically) red wine, steeped with an array of spices and citrus or other fruits. Think warm, winter sangria.

Likely invented by the Ancient Greeks at some point during the second century, it was first made using leftover or spoiled wine, as well as batches that just didn't turn out well. Through heat, spices and sweeteners, any undesirable flavors were masked and not a drop was wasted.

However, it's the fifth-century Romans who are credited with spiking the popularity of the drink with their version, known as conditum paradoxum, as they expanded their empire across Europe.

During this time, all types of spices, herbs, sweeteners and even flowers were being discovered and incorporated into food and drink—which is why different countries and regions have their own take on the recipe. Just a quick Google search will pull up countless recipes, each using different ingredients.

In Germany, it's known as glühwein (translation, “glow wine”) and is a popular drink to sip while strolling outdoor Christmas markets. Head to France, and you'll find vin chaud which is typically less sweet than other mulled wine versions. And in Scandinavian countries, it's called glogg and often comes with a glug of brandy or other spirits for a little extra kick.

If you have a party planned or simply want to get warm and toasty on a cold Colorado eve, mulled wine is the perfect drink. Let's take a look at a basic recipe to get you started. Feel free to cut portions it in half for smaller gatherings, even parties of just two.

Steps to Mull Your Wine

While this recipe uses a slow cooker, you can absolutely heat your mulled wine on the stove, preferably in a heavy-bottomed, Dutch oven. Use medium heat until the concoction begins to steam (about 5 minutes).

If bubbles form at the surface, reduce the heat to low or a smaller burner if it continues to bubble. By warming gently and NOT boiling, you'll prevent over-spicing and a bitter flavor. Plus, boiling will cause all the alcohol to evaporate!

Mull It Over & Make It Your Own

One of the great things about mulled wine is that the recipe is flexible, and you can completely customize your own batch based on your own preferences and what ingredients you already have in your pantry.

A few notes, swaps and ideas to get you started...

First, choose your wine carefully. You want a classy but not expensive wine. Aim for a $10-$20 bottle of dry, full-bodied red wine. Bright and fruity. Nothing too sweet or oaky. While our recipe used a Cabernet Sauvignon, you can go with a Zinfandel, Merlot, Syrah or Pinot Noir.

If you want an unleaded, zero-proof option, trade out the wine for apple cider, cranberry, pomegranate, or grape juice.

Now it's time to add flavor with fruits and spices. You want to use fresh, whole spices, so check the expiration date on those cinnamon sticks hiding in the back of your pantry! And remember, infusing flavors is a good thing until it's gone too far and your mulled wine tastes like bitter potpourri. Adding all of these suggestions and simmering your wine for long periods of time are not recommended.

Next is sweetener, and this is pretty straightforward. Use whatever you have on hand! White or brown sugar is great. Honey or agave as well. You can also use pure maple syrup which provides a great complementary flavor. Just be sure you're using the real stuff, not artificially-flavored pancake syrup.

Some recipes also call for adding various juices or apple cider which is fine but can change the taste significantly.

Last but not least, if you want to kick things up a notch, you can add in 1/4–1 full cup of extra booze: brandy or cognac, bourbon, Ruby Port, dark rum, or Grand Marnier, which is an orange-flavored liqueur.

There you have it—now it's time to get started on perfecting your winter sangria. Cheers!